We've made it a point to try many brands and types of optics in order to find the ones ideally suited for any given application. This allows us to make first-hand recommendations to our customers. There are many great optical sights on the market today in a broad range of prices, and they cover a range of prices from less than $300 to well over $2,000. The fact is, you don't have to spend a fortune for a piece of glass that will do the job. Your choice needs to meet the five criteria that we use to judge an acceptable scope.

In discussing of optics, there must have a basic understanding of the "compromise solution" that goes into engineering any optical gun sight. This is what we call the Optical Triangle since any scope represents a compromise point between three competing values: magnification, eye relief and field of view.

Each quality comes at the expense of the other two. In some cases, such as the Trijicon TA01 ACOG (including the JP version), the compromise is pushed towards maximum field of view at highest possible magnification. The end result is a 4x scope with an extremely wide field of view but at the expense of eye relief. However, the wide field of view results in greater situational awareness, which could save your life in a combat situation help you notice a target in competition you might otherwise have forgotten to engage. You can live with the short eye relief on a typical 5.56mm rifle due to the relatively low recoil impulse. You just need to make sure that the scope is properly positioned and that you practice mounting the rifle to ensure that your head position and cheek weld are consistent.

Electronic dot scopes such as the JPoint or Aimpont represent another extreme compromise. By limiting magnification to one power, eye relief is maximized so the field of view is essentially only limited by the peripheral vision of the shooter. The result is an optic that allows two-eyes-open reflexive target engagement in close-quarters, dynamic situations.

However, with most variable-power scopes a middle compromise must be struck to allow for comfortable eye relief and usable field throughout the magnification range. Most higher quality optics strike a good compromise in this respect.

In the end, there is no perfect scope that does everything well. In addition to the consideration of price—which doesn't have to be as great a limitation as it seems—you particular needs and application should drive your purchase. There is no all-around "best" scope, but you can certainly find the scope that's the "best fit."

The Virtues of True 1x

There is certainly no shortage of functional optics/sight setups on the market for the practical carbine, whether used for competition or real-world applications, but thanks to recent advancements in optical engineering though, a trend has emerged favoring versatile scopes that combine true 1x with high magnification ranges for long-range precision use. When done right, this is a potent recipe for incomparable scopes, hence the proliferation of the 1-4x, 1-5x, 1-6x and even 1-10x magnification ranges now on the market.

The most essential attribute of this type of optic is the difficult achievement of a 1x setting as close to zero magnification as possible, thereby allowing for actual two-eyes-open reflexive engagement of close-range targets. I like to refer to this quality as "transparency" in that, like a true dot sight, the optic itself becomes effectively unseen to the shooter, who ignores the body of the scope focusing only the dot (or reticle) in space.

Of course, dot sights are virtually useless at ranges beyond 200 yards depending on target-to-background contrast. If you can't see the target with your naked eye, you can't engage it with a dot sight, so the combination of true 1x with some level of magnification bridges the gap between the dot sights and variable- or fixed-power magnification scopes resulting in the most versatile overall optics package.

Unfortunately, a number of these new scopes have something less than 1x, resulting in a "fish eye lens" effect that makes it very difficult to shoot with both eyes open. Anything more or less than 1x results in a conflict in visual processing causing the brain to reject input from the non-dominant eye. The result is collapse of the situational awareness so essential to the dynamic environment of CQB engagement as well as a loss of speed in competition, or worse, in a real-world application. Hence, we have the popularity of the true 1x, non-magnifying dot site for these types of shooting.

You can be sure that the 1x scopes we offer like the Swarovski Z6i and Vortex line have each been rigorously field-tested in a variety of applications to verify that performance, build quality and engineering are up to JP expectations. Like all the scopes we offer, they are individually selected to complement the quality of our rifles, and while their prices may vary, their value is constant.

Many have never heard of the Horus Vision system of ballistic compensation, but you owe it to yourself to know a little something about it and to consider it when optics shopping.

As John Paul tells, it, he first saw a scope with an HV reticle on the prize table at the 2001 International Tactical Rifle Championship. It had a picture of the reticle on the end of the box, and he thought to himself, "What the hell is that!?" Someone scooped it up before his turn at the table, but his curiosity was piqued. All these years later, he'll tell you, "I can now say that the HV reticle is, without a doubt, the key to the fastest first-shot-hit on unknown distance targets I've ever used." On the long-range tactical shooting circuit, many pro-level shooters use this system with more adopting it every year. While some aspects of the HV system take some getting used to, the benefits far outweigh the challenges of the learning curve.

When we say "unknown distance" targets, we're referring to real-world shooting or tactical long-range competitions, which are designed to simulate real-world engagement either with game or enemies. In other shooting sports such as NRA High Power, Benchrest, F-Class, etc., shooters have the luxury of engaging known-distance (KD) targets, meaning you can have sights or an optic zeroed for the exact range you are shooting since it will not change. In the real world (or a facsimile thereof), we simply don't know the range of our potential targets.

In the past, the military has used the mil-dot system for such ranging and taught a system by which the shooter would dial in their "come-ups" and "hold-offs" using the elevation and windage turrets on the scope. While effective, this system is time-consuming, it wears out the adjustments in the scope, and often shooters simply forget to "come back" to zero. It also assumes perfect tracking time after time. The HV system eliminates all of that because once you lay in your main zero, you never need to adjust it again. You simply find the spot in the grid dictated by your ballistic program.

Like the mil-dot system, the HV reads in mil-radians, so if you're accustomed to thinking in inches or minutes of angle, that is probably the most difficult part of the system to master. You'll have to change gears and think in mils in addition to inches or MOA, but once you've accomplished that, the rest is easy. 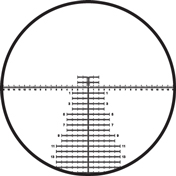 Like JP, the first thing you'll notice is that the HV reticles form a Christmas tree-like grid below the main horizontal stadia line. At first, this arrangement can seem very intimidating and overcomplicated, but after spending a bit of time learning and shooting the system, it becomes very intuitive as well as incredibly fast and effective. For many shots, after checking my range, you'll end up memorizing the hold-offs at 100-yard increments through repetition alone. So, how is this supposed to work? 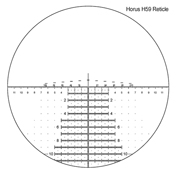 The reason for this apparent change in size is that the reticle retains its relative relationship to the field. In other words, if your hold-off is one mil up and .5 mils left, that relationship to the target will always be the same no matter where you have the magnification set. It's the beauty of the frontal-plane reticle: you can have a mapped reticle and know that the relationship of all that information will be constant regardless of where you happen to have the magnification. Therefore, you can set the scope to a magnification that makes the most sense for the particular shot.

How about an example? Let's say you're shooting a .260 Remington with a 123 Hornady A-MAX traveling at about 2900 feet per second, with a BC of .510. There's a crosswind of 5 mph from 9:00 (full value), and the target is at 1125 yards at an altitude of 6700 feet. You enter all this info into a ballistic program you can run on your smart phone, and it tells you that you need to hold 7.8 mils up and 1.0 mil left. You place that point in the grid over the target, compose the shot and squeeze the trigger. About 1.5 seconds later, the bullet hits the intended target, and about three seconds after that, you hear the impact.

Does this all sound impossible? Well, that's no hypothetical. A few years back, John Paul came into the office raving about just that shot. After spending some time on the HV system, he was at the annual JP Rocky Mountain 3-Gun Championship at the NRA Whittington Center. With Tate Moots (top sniper for the DOE) watching, he entered just that information on his ballistic computer and hit a 12" plate using a .260 MOR-07 with a cold bore shot using the hold-offs displayed. Needless to say, he's since not the only JP employee or team shooter who's used the system in a number of matches with outstanding results not possible with any other system.

With that said, the HV reticle system is available in the Bushnell HDMR or US Optics scopes as an option, so you have a range of prices and opportunities for scopes equipped with frontal plane HV reticles. While the Horus Vision system is not for every shooter or every application, for those willing to do a little homework and put in the practice in order, you're all but assured outstanding long-range hit probabilities exceeding any expectations or previous experience.

We will accept returns of optics for exchange or refund up to 30 days from date of sale if you decide that some other optic is better suited for your purposes. You must call for a return authorization number and the product must be new in box, unopened (cellophane still on the box if part of the original packaging).

We only sell high-quality optics warranted by the original manufacturers. Once a scope has been opened, mounted or used in any fashion, repair or replacement for warranty related defects will be handled by the manufacturer, not JP Enterprises, Inc. The manufacturers represented on our website offer quick and efficient warranty service and it is actually faster for you to deal direct with them rather than sending it to us and having us send the scope in for service. We apologize for any inconvenience this causes, but this policy is standard throughout the industry.

Due to the increasing rate of fraudulent purchases of high priced scopes online using stolen credit cards, we have put into effect the following security measure procedures regarding such online sales:

Safety Notices
6.5 Grendel® Safety Notice
2010-01-28
What Our Customers Think
"This is a spectacular part"
"You guys are freaking masters."